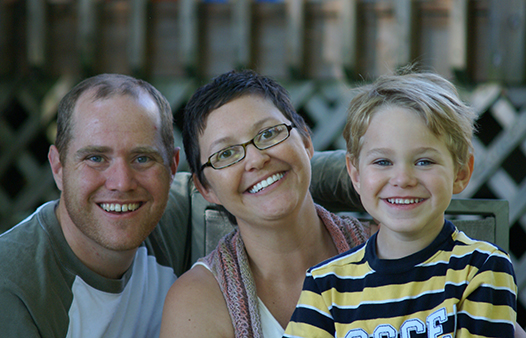 Taking on cancer is always a battle, and for Renee Sendelbach, it has been a fight with many fronts.

In 2008, when her son Ian was 13-months-old, Sendelbach felt a lump in her breast and went to her doctor thinking it was just a clogged milk duct. But a mammogram and sonogram told a different story: She had breast cancer – triple negative breast cancer, which at the time was deemed the worst type to be diagnosed with because it grew at the fastest rate.

Intensive treatment began immediately, with four rounds of AC chemotherapy (Adriamycin and Cytoxan) followed by four rounds of a more intensive chemo (Taxol). The medications did their job in eliminating the tumor, but Sendelbach needed to have a lumpectomy just to be sure that it was all gone. A course of 36 radiation treatments came next.

“I didn’t think I’d have to have radiation since things had responded so well,” Sendelbach said. “That was a big letdown. During this time depression set in and it was like, ‘Wow. My life has completely been flipped upside down.’ After radiation, it took me I don’t even know how long to get ‘normal.’ “

Out of the darkness came a sort of freeing light, with Sendelbach staying home with her son full-time and taking up painting and writing. “I became the person I always wanted to be but was scared to be. I was scared to not work because I thought I would lose my identity.”

After a routine scan in March 2011, she received a same-day call from Dr. Beth Hellerstedt of Texas Oncology. She needed Sendelbach to come in that day. “I broke down,” she said. “I called my best friend Gina and told her to come over right away. She came with her son. We‘ve always done a lot of things together with our kids. We went to Central Market and might have had a bottle or two of wine and just looked at each other thinking ‘What could it be?’ I just thought the breast cancer is back and I was going to have to do all of this again.”

Later that day, Gina took her son while Sendelbach and her husband, Eric, went to see Dr. Hellerstedt. When the doctor came into the room and hugged her, Sendelbach knew something was very wrong. Her formerly Stage 1 cancer was now Stage 4 and was in her lungs, lymph nodes and bones.

“I couldn’t process this because I was not aware that breast cancer could spread to those places. I remember asking her, ‘So, I have lung cancer now?’ and she said ‘No, you have breast cancer in your lungs.’”

When talk turned to prognosis, it was too much for Sendelbach and she left the room, leaving Eric and Dr. Hellerstedt to talk. “He told me years later that she told him that day that, according to statistics, I had about 26 months to live.”

Those close to her suggested to Sendelbach she needed a second opinion, so she got one, confirming the exact diagnosis that Dr. Hellerstedt had provided. “I thought why in the world would I leave my beloved Dr. Hellerstedt to go to another doctor, farther away? I called her and said ‘I’m done. What are we going to do?’”

By remaining with Texas Oncology, Renee was able to receive quality cancer care all while being close to home and loved ones.

After another four rounds of chemo, a scan showed an unbelievable amount of improvement. The next scan was not as promising. Not only had the cancer grown, it had tripled in size in one area and there were new tumors on her lungs. It was time to change to another kind of chemo. Sendelbach was also approved for a trial drug that was added to the new chemotherapy. “The trial was about to close in eight  days so had my bad scan not come when it did, there would have been no chance for me to get into that trial,” she said.

Three chemo rounds and one PET scan later, they got great news: no evidence of disease. Even her doctor couldn’t believe it. But the scans kept coming back clean, so Sendelbach and her husband decided that in January 2012, they would seek approval to continue the trial drug without chemo. Their request was granted. “That summer, we just blew it out,” she said. “We had the summer of our lives. We went to Disneyland with my mom and aunt. But when we got home one of my good friends had passed away while I was gone, from Stage 4 breast cancer. That shook me and brought me back to reality real hard,” she said.

Soon after, Sendelbach and her son were shopping when her right leg went numb and she couldn’t walk. She and her husband called the doctor’s office and were told to get to the emergency room. There she was told she had a brain tumor a little smaller than a tennis ball. She had surgery and eventually things went back to normal.

She had MRIs weekly because of a constant headache and she was sure the tumor was back, though doctors reassured her that it was gone because they had cut it out. Sendelbach developed radiation necrosis, or death of tissue from radiation treatment. Then they discovered the tumor was back. “We operated again, two weeks before Christmas and it was awful,” she said. “My son was 5, and everyone wants their mom on Christmas.”

Physical therapy helped her with movement and control issues she continued to have in her right leg, causing her to have to relearn to do many activities such as driving and working around the house. When her foot started feeling odd again months later, she called her doctor and said she needed to have another MRI. The tumor was back and she needed another surgery. That was three years ago.

“It has been three years since my head has been clean and five years since my body has been clean from cancer,” she said. “I wrote a book because in the beginning, it was too much to keep telling everyone the whole story over and over again. It all started with a blog. I had forgotten how much I loved to write. I got so many people telling me to turn it into a book so I did.”

Sendelbach celebrates the release of her book, “Renee in Cancerland,” at the Seton Breast Care Center on Saturday, October 17 and again at 2 p.m. Sunday, October 18 at the community center at 2016 Klattenhoff Drive in Austin, ZIP code 78728.

“People who have not met me but have read my blog tell me ‘I feel like you are sitting down here with me telling me your story,’ and that’s just what I wanted to have happen,” she said. 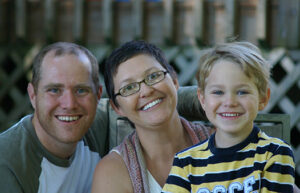