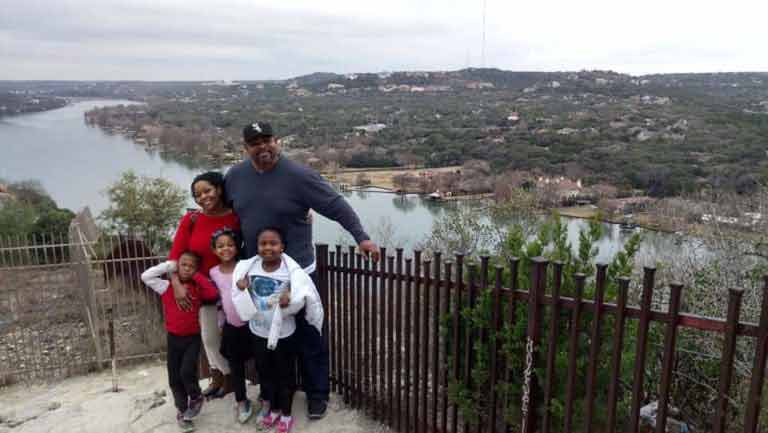 Ronald Strickland slept on his son’s bedroom floor a few weeks ago. He built a pallet piled with blankets and pillows at the special request of his son, who is five years old and has never known his father without cancer.

They fell asleep together, but Ronald woke up in the morning alone.

He laughed as he recalled how he outlasted his son, who crawled back into his own bed in the middle of the night. It’s a treasured memory he’s been waiting years to create, because when you have cancer, Ronald said, the little moments in life mean the most.

“Before I was diagnosed with chronic myeloid leukemia (CML), I was active with my older kids and I’ve always felt guilty that I haven’t had the energy to play with my younger children,” said Ronald, a father of six. “The morning after my son and I slept on the pallet on the floor, my wife asked me how I felt, and I hadn’t even thought about it. I wasn’t stiff, I could move my joints.”

That was a significant development for Ronald. CML is a type of cancer that affects the blood and bone marrow with an overproduction of white blood cells. Ronald has lived with excruciating pain from gout, a lingering side effect of CML, since shortly after his diagnosis in October 2012.

Ronald’s cancer journey has been an eventful one, filled with the highest of highs and extreme lows, and plenty of twists and turns.

When a cancer diagnosis is a marathon, not a sprint

In the months prior to his diagnosis, Ronald noticed extreme fatigue. He was working a strenuous job, had just turned 40, and attributed the lack of energy to his age. Ronald and his wife, Constance, were shocked when a trip to the emergency room resulted in Ronald’s cancer diagnosis.

“I felt like I hit a wall. I was training for the Chicago marathon and then suddenly couldn’t even walk three or four blocks,” said Ronald. “I couldn’t figure it out. I’ve always been healthy, physically active, and I was a vegetarian at the time.”

The years that followed were painful – physically, emotionally, spiritually, and financially. They were also unpredictable.

In 2016, Ronald’s health took a turn for the worse. His CML was aggressive, and he needed a stem cell transplant.

“I was told I qualified for hospice,” he said. “At one point, I actually picked out the bed I thought I would pass away in.”

At the end of 2018, Ronald’s oldest daughter learned she was a stem cell match. Ronald’s transplant was a success. His daughter helped save his life, but his journey didn’t stop there.

Following his transplant in 2019, Ronald was declared cancer-free from leukemia. Two days later, he found out he was diagnosed with lymphoma.

Ronald’s oncologist, Dr. Sylvia Jaramillo, and his care team at Texas Oncology–Austin North have been a steady and consistent source of support and encouragement for the Strickland family.

A community of care

“Ronald has had a long journey with an aggressive form of CML, and prior to his stem cell transplant he had exhausted multiple lines of therapy,” said Dr. Jaramillo. “He had his stem cell transplant at The University of Texas MD Anderson Cancer Center, and was motivated to continue pursuing the most leading-edge care possible.  He has been very brave throughout this process. He’s a runner, a talented poet, and a dedicated family man – he’s an inspiration to everyone he meets.”

For the Stricklands, the feeling is mutual. Both Ronald and his wife, Constance, said receiving treatment at Texas Oncology has made all the difference.

“From the moment we met Dr. Jaramillo we knew she was a cut above,” said Constance. “But it wasn’t just Dr. Jaramillo – it was everyone at Texas Oncology. Our entire family has been welcomed with open arms. It has made this difficult experience that much easier to know we’re in the best hands.”

From the front desk to the phlebotomist, Ronald said everyone at Texas Oncology knows the Strickland family: “The staff always have smiles on their faces. They understand when you’re in pain, or when you’ve had a bad day, and they work to minimize that as best as they possibly can. They have empathy down pat – that’s important to me.”

Ronald also credits his family for their support throughout this journey. His wife helped administer his chemotherapy twice a day. His children also stayed by his side, often heading straight to the hospital from school and spending many nights in his room. Together they documented their experience as a family in a YouTube series called “The Strickland Chronicles Family.”

Perseverance has been a theme in Ronald’s life – it’s something he strives for himself but also encourages in others. He said that no matter what anyone goes through, a positive outlook can make a world of difference.

His advice for others? “Put forth the effort to live. Every day, just live. They caught my lymphoma early, and I’m going to keep improving,” Ronald continued. “I’m already feeling better. You know, it’s easy to feel sorry for yourself but at the end of the day when you get pushed down you get back up.”

And that’s exactly what Ronald intends to do. When asked what’s next for him and how he intends to live, Ronald’s response was simple but no less inspiring: “Chicago Marathon 2020.”

Cancer affects men in all walks of life and doesn’t discriminate by age. According to the American Cancer Society, one in three men will develop some type of cancer in his lifetime. Maintaining healthy lifestyle habits and regular screenings can help prevent cancer. For more information on Texas Oncology and cancer prevention and treatment, visit www.TexasOncology.com. 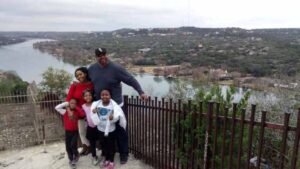