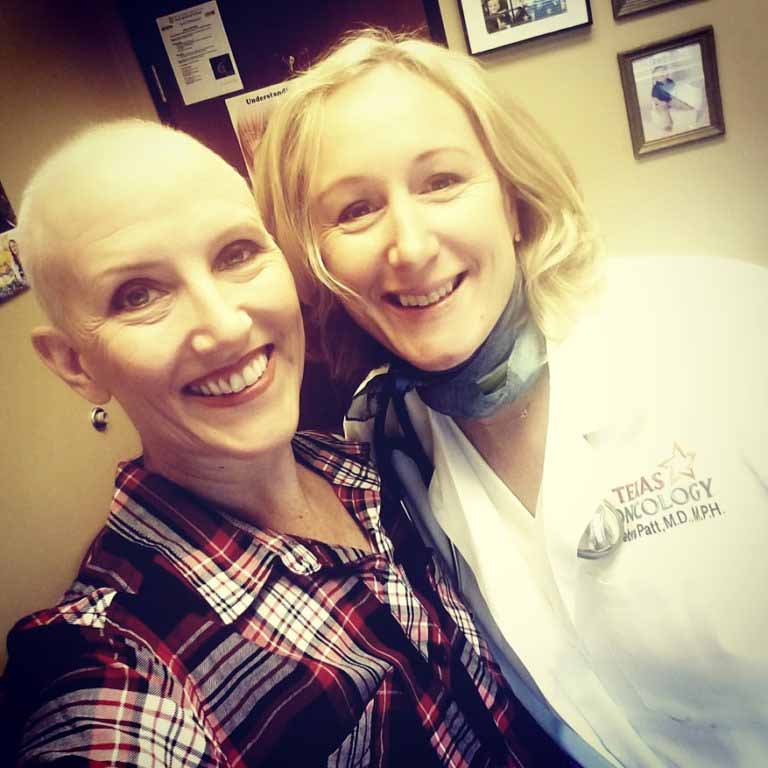 What’s so funny about cancer? For professional public speaker and improv comedienne Vickie Sokol Evans, a sense of humor and fearlessness required in performing comedy were essential to her successful fight against breast cancer.

Even though she had no family history of breast cancer or any symptoms, Vickie scheduled a mammogram in January 2017 after the unexpected passing of her mother three months earlier.

“I was too busy and too healthy to go to the doctor otherwise. Mom’s death inspired me to get my life in order a bit.”

The mammogram results indicated a need for a closer look, which led to a biopsy and the discovery of Stage 0 cancer in one of Vickie’s breasts. Her younger sister recommended Texas Oncology–Austin Central, where Dr. Debra Patt would make a life-changing decision for Vickie. As it turns out, it wasn’t only Stage 0 cancer she was battling.

“Dr. Patt suggested an MRI and found two additional tumors,” said Vickie Evans. “I had three tumors! The third tumor was the largest and meant Stage 2 aggressive cancer. Had I not had the MRI prescribed by Dr. Patt, we would’ve just thought it was Stage 0 breast cancer.”

Vickie, who is now cancer-free, has high praise for the care she received from her team at Texas Oncology.

“My team was amazing,” said Vickie, of medical oncologist Dr. Patt and breast surgeon Dr. Heather King. “We became kind of a family because I was there every single week for chemo treatments, plus appointments to prepare for my double mastectomy and reconstructive surgeries. They became my summer family this year.”

Vickie is a public speaker who travels internationally, giving speeches and leading technology training sessions. She’s also a comedienne who studied improv for 10 years in New York and Texas, and regularly uses that background during speaking engagements. But the importance of comedy in Vickie’s life also played a role in her cancer journey.

“It actually impacted my journey quite a bit,” said Vickie.

After losing her hair, Vickie wasn’t sure if she was going to wear a wig, go bald or wear scarves. She says her comedy helped her make the right choice for her.

“I decided to go bald and make T-shirts with the hashtag #GetScreened to help spread the word to anyone I met,” said Vickie. “Without my comedy background, I don’t think I would’ve had the guts to do that. I would’ve hidden behind a wig, scarves or a hat. But comedy has taught me to take risks, be vulnerable, and just be truthful in where I am in my story so that others can learn from it.”

As a person in the public eye, Vickie wants to share her story with others to spread the word about the importance of getting regular cancer screenings.

“I decided that I was going to use my platform to help educate my audiences and encourage them to get screened,” said Vickie. “Had I been screened two or three years ago, we might’ve been dealing with Stage 0 breast cancer all the way. But I waited too long. I was too busy and too healthy to go to the doctor and I don’t want anyone else to wait too long.”

Vickie says that while some people fear screenings because they’re worried about the results, cancer can be treated most effectively when it’s discovered early.

“Whether it’s breast cancer, colon cancer, prostate cancer, lung cancer or skin cancer–just go get screened, because it’s better to catch it early than when it’s too late,” said Vickie.

Vickie added that for anyone fighting cancer, selecting the right team of doctors makes all the difference.

“I guess my number one piece of advice for someone finding out that they have cancer is to pick their team,” said Vickie. “Dr. Patt and Dr. King created a personalized treatment plan for me, and maybe that is why I never felt like I had cancer. They took control of my care and didn’t make me feel like I was a cancer patient.”

Now that she’s on the other side of her journey, Vickie says she’s enjoying the brand new look, feel and perspective that comes with being cancer-free.

“My hair is growing back, and I’m excited,” said Vickie. “I used to have long, curly hair; and I’m excited about what’s to come. There is kind of this fresh, new look physically but also this fresh new outlook on life, too.”

While most people may not think much about being screened, Vickie’s goal is to spread the word as far as possible, in hopes that others will set regular appointments and speak to their physicians.

“No matter how healthy you feel, no matter how busy you are, it is so important just to make those doctors’ appointments and get that clean bill of health; or, if you end up having cancer, hopefully it’s early stage, which in most cases there’s a cure for. I still can’t believe this happened to me. But I’m grateful for the decision I made to get screened.”

In addition to adopting a healthier lifestyle, early detection with regular mammograms remains the single most effective way to combat the disease. Steady declines in breast cancer mortality among women since 1989 have been attributed to a combination of early detection and improvements in treatment. It is important to discuss individual risk factors, including age, menopausal status and family history with your physician to determine screening needs. Vickie having comprehensive care at Texas Oncology was a life-saving choice. 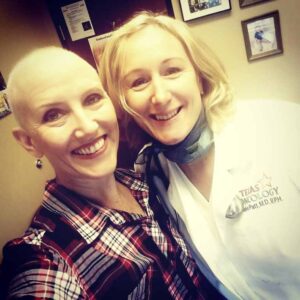