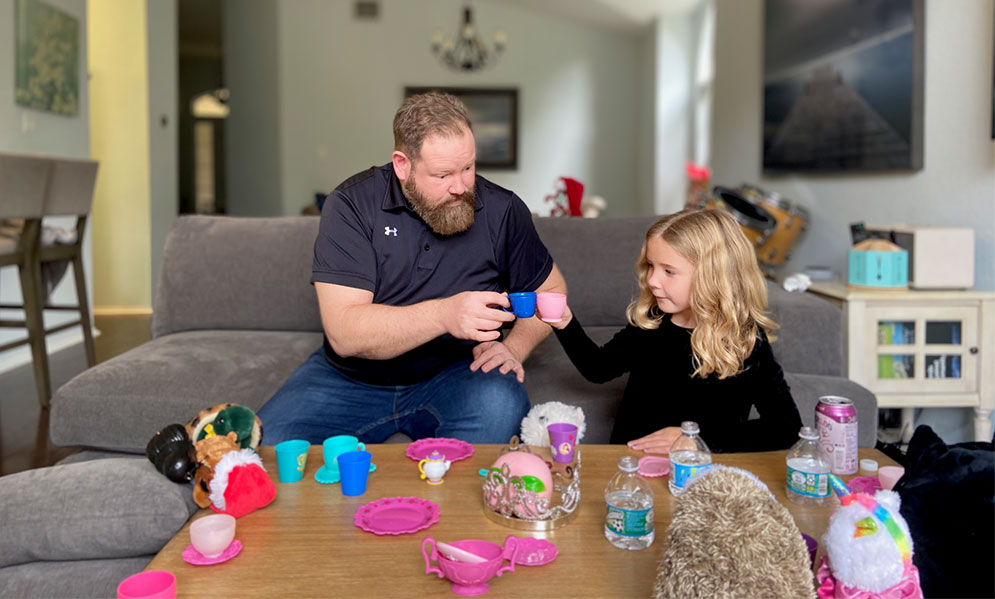 In 2017, Paul Lang, now 48, was at a self-professed low moment in his life. He was a recently divorced father of three, he just found out he was being laid off from his job in the tech industry, and then, he was diagnosed with cancer.

‘The start of this cancer saga’

At work, Paul noticed he was becoming very fatigued during the day. He didn’t think much of it, attributing it to working crazy hours in the technology sector. In June 2017, he was laid off from his job.

Paul decided he needed to pay a visit to his primary care physician to get his symptoms checked out. When the doctor’s office called with his results, the news was dire. He was told to get to the nearest emergency room urgently.

“I remember the ER doctor coming in with a really grim expression after he received my test results,” says Paul. “He said we believe you have leukemia, and you need to be admitted to the hospital.”

Paul was in a state of shock and couldn’t process this news. Because the hospital he had chosen for his ER visit didn’t have an oncology unit, he needed to be transferred to a different hospital. He checked himself out, went home, called his mother, and cried.

‘Three atomic explosions going off in a row’

The next morning, Paul was checked into the hospital on the oncology floor and immediately started chemotherapy. According to his blood work results, Paul’s white blood cell count was in the 300,000s, while the normal range is 7,000-10,000, putting him at high risk for a heart attack, stroke, seizure, or even death.

Prior to diagnosis, Paul had several symptoms that should have been warning signs something was not right. In addition to the fatigue, he had abdominal discomfort on one side – a symptom caused by an enlarged spleen due to his high white blood count. He also had a low-grade fever and flashing in his eyes, which turned out to be retinal hemorrhages from the high white blood and cancer cells.

“I was the typical male, a living embodiment of that dangerous practice of not seeing a doctor if something felt off,” said Paul. “I always thought I could just push through. Drink more caffeine. Deal with it later. Yet here I was, divorced, laid off, and now I had cancer. It was like three monumental atomic explosions going off in a row.”

‘I was very lucky’

Once admitted to the hospital, Paul was assigned an oncologist, Kathryn Hudson, M.D., Texas Oncology—Austin Central. “It was just happenstance she was on call that day. I was very lucky,” says Paul.

From the moment Dr. Hudson came into the room, Paul was put at ease. “She is an extremely warm, caring person who was supremely concerned about my health and probably a bit confused as to why I didn’t go to the doctor sooner.”

Dr. Hudson explained everything that was happening to Paul and how they were not yet sure what type of leukemia he had. What was clear is that his situation was extremely dangerous, and they needed to get his white blood cell count down.

Every day, Paul’s white blood cell count was written and tracked on the white board in his room. “It almost became like a game,” Paul recalls.

‘I have incredible news’

One day, Dr. Hudson came into Paul’s room with a beaming smile. “I have incredible news for you,” Paul remembers her saying. It was confirmed that Paul had chronic myeloid leukemia (CML). This was great news because there was a highly effective drug to address this form of leukemia, and Dr. Hudson assured Paul that he was going to be okay.

“I went from having my young children standing at my hospital bed wondering if they were going to have a father, to having hope again,” said Paul.

“We did a bone marrow biopsy and started on treatment right away,” said Dr. Hudson after confirming Paul’s diagnosis. “He was put on an inhibitor treatment that targets gene mutation in CML. This is a long-term medication that controls leukemia well, and one of the medical breakthroughs that we have science to thank for.”

‘Never imagined I’d be where I am at today’

Upon release from the hospital and with a positive response to treatment, the leukemia cells started plummeting and Paul’s life began to return to normal. He was able to return to work full time and got remarried.

“When I met Paul, he was a young dad and had a lot going on in his life. When you get the diagnosis of leukemia, it’s always devastating,” said Dr. Hudson. “It’s wonderful how quickly he’s improved. He can still be the dad he wants to be, do the work he wants to do, and not let leukemia get in his way.”

Today, Paul’s cancer is in remission and leukemia cells have been undetectable for three years, even with the most sophisticated testing. Five months ago, Dr. Hudson suggested Paul consider a cessation trial, whereby he stops the use of the inhibitor treatment medication to help ease some of the side effects like brain fog and water retention.

“When you think about it, it’s scary to know you’ve been kept alive by a medication with my chronic form of leukemia,” said Paul. “I got to the point where I realized the benefits of cessation to focus on my health outweighed the hesitation of if/when the cancer comes back.

Paul stopped the medication two months ago, and cancer is still undetectable in his bloodwork. “This was unthinkable when I was first diagnosed,” says Paul. “I never imagined I’d be where I am at today. It’s incredible.”

‘The proof is in the outcome – I’m still here’

Paul went from thinking he would not be around for his children to living a completely normal life. “I owe this to Dr. Hudson,” he says. “She was at the leading-edge of what peer-reviewed published journals were saying to do, and it blew my mind when I started connecting the dots. She had a plan all along to get me here.”

“The proof is in the outcome – I’m still here. I hope this is the end of my cancer journey, but if not, I’m comforted knowing I have an amazing doctor and human being in Dr. Hudson,” says Paul.

One of the things Dr. Hudson appreciates about Paul is his sense of humor. “He’s hilarious and self-deprecating, always positive and willing to share what is going on in his life,” she says. “We have a close relationship, and it’s very gratifying to take care of him.”

A diagnosis of CML used to be a deadly, but Dr. Hudson says Paul can enjoy a normal life and life expectancy. “His outlook is excellent as long as we monitor his blood, and he’s doing great,” she says.

Paul has made major strides focusing on his health and wants to appreciate every second of life. He’s making memories with his family and took a trip to Disney World this summer. “I didn’t appreciate the ability to do things as much as I do now. There are good things that can come from a frightening cancer experience,” he says.

Paul’s advice to others going through their own cancer journey? “No matter what, don’t lose hope. Fight every step of the way. There’s always hope. There is always a chance. Don’t lose yourself in the cancer diagnosis. It does not define you. Stay true to yourself and who you are.”

In 2022, approximately 4,509 Texans will be diagnosed with leukemia, resulting in an estimated 1,847 deaths. For more information about leukemia, visit TexasOncology.com.