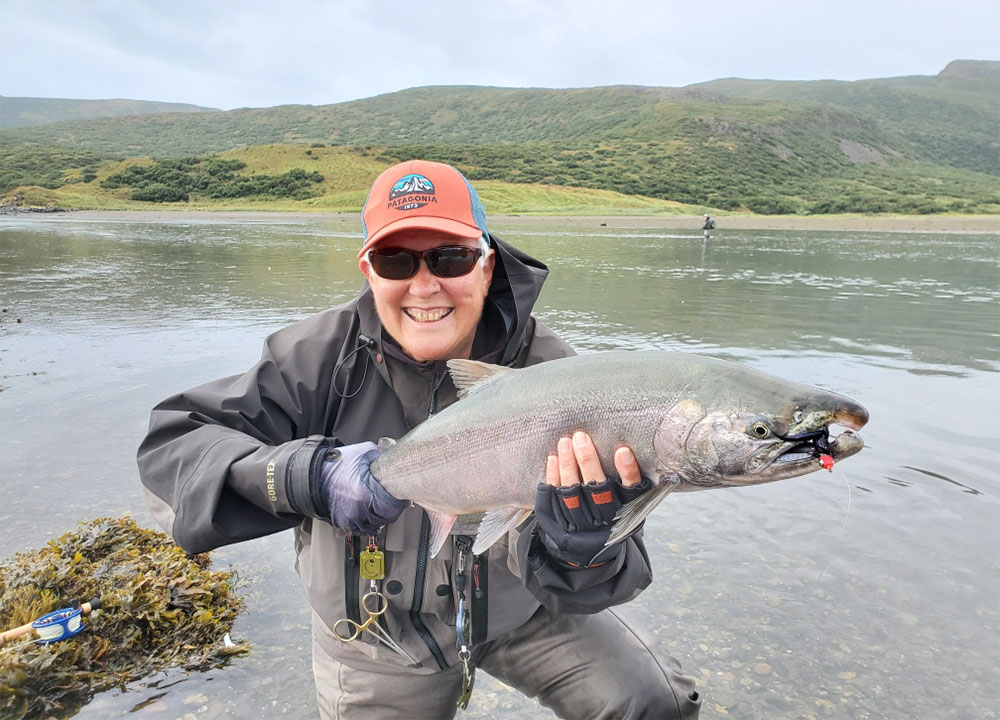 Sailing through the air, the line leaves soft ripples in the water as Lorinda Wilks fly casts. A lifelong passion, fly fishing has been central to Lorinda’s life for decades.

“They say ‘it’s the tug that’s the drug’ – fly fishing draws you in,” says Lorinda. “It’s not conventional, and I like the challenge.”

Fly fishing wouldn’t be the only challenge Lorinda and her husband, Bruce, faced. After feeling like something wasn’t right, she visited her gynecologist in August 2019, where a biopsy of her uterus was taken. For a closer look and official diagnosis, she was immediately referred to Helen Dinkelspiel Eshed, M.D., Texas Oncology–Austin Central and Texas Oncology–South Austin.

Stunned, Lorinda and Bruce held each other and wept. Bruce comforted Lorinda, telling her they would fight this together.

During treatment, Lorinda drew upon the love and support offered by her community, including friends and family, her church, coworkers, Texas Oncology staff, and her dog, Street – named for his “street dog” appearance. At times she would break down, the physical and emotional burden almost too much to bear.

She started collecting a box of the cards, letters, and words of encouragement that her community gave to her. “When I felt like it was getting to me emotionally, I would look at those letters and hold onto that support,” said Lorinda.

After her surgery, she began feeling better. She missed fly fishing – her peace and happiness, especially during treatment. Once she was cleared to get back out on the water, she relished it.

“Everything was like clockwork. It felt right to be out there again,” added Lorinda.

Focused on physical and mental strength

But in May 2020, something felt off. She started experiencing pain and nausea and lost her appetite. A scan found that her cancer had returned and continued to spread.

“I broke down,falling to my knees. Pat Balzac (RN), one of the nurses at Texas Oncology, knelt with me and said, ‘you’re going to be OK,’” recalled Lorinda.

Dr. Eshed recommended immunotherapy, a treatment that boosts the body’s immune system to attack cancer cells to stop or slow their growth or limit the cancer’s ability to spread. “Despite the physical, emotional, and mental challenges, Lorinda motivated herself to come in for immunotherapy treatment,” added Dr. Eshed.

Initially, there were days where all Lorinda wanted was to lay in bed with Street. But she was determined to get stronger – physically and mentally.

She would walk a little further each day. Exercise on the elliptical a little longer each day. When climbing stairs, she felt like Rocky Balboa, the fictional boxer famous for running up the steps of the Philadelphia Museum of Art.

Lorinda also learned to manage her emotions. She turned to her faith and prayer. She began meditating. She discovered a cancer support group.

“Hearing other cancer patients and survivors’ stories helped answer my questions about why I felt the way I did, and how other people dealt with the emotional aspect of cancer,” explained Lorinda. Within three weeks, her energy had returned.

Cancer changed Lorinda. “Before cancer, I took life for granted and thought, ‘it can never happen to me,’” she said. “Now, I know I’m here for a reason. I’m grateful and I want to help people, care for them, and offer that emotional support.”

Today, Lorinda is cancer free and in remission. She receives immunotherapy every three weeks, and her scans are conducted further and further apart because her body responded so well to treatment.

“Lorinda has had a complete response to immunotherapy,” said Dr. Eshed. “She’s an inspiration, and I’m in awe of her ability to recognize the importance of mental health in cancer care.”

Lorinda returned to work full time in July 2020, where she spends nearly 10 hours a day on her feet selling fly fishing gear and teaching lessons. No matter what people are facing, she wants to encourage them to reach out for help.

“There are so many hurdles to overcome with cancer, and you need support for both the physical and mental aspects,” said Lorinda. “Dr. Eshed and the Texas Oncology team are like family. They saved my life and helped me fight to find the strength that I had inside.”

Now, Lorinda is even more thankful for the life and opportunity she’s been given. “I want to live each day like I’m going fishing.”Among Texas women, more than 4,000 new cases of endometrial cancer are expected to be diagnosed in 2021. For more information about endometrial cancer and other types of gynecologic cancer, visit TexasOncology.com. 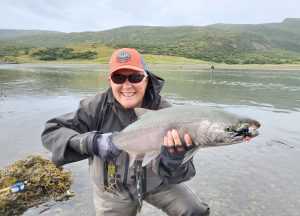