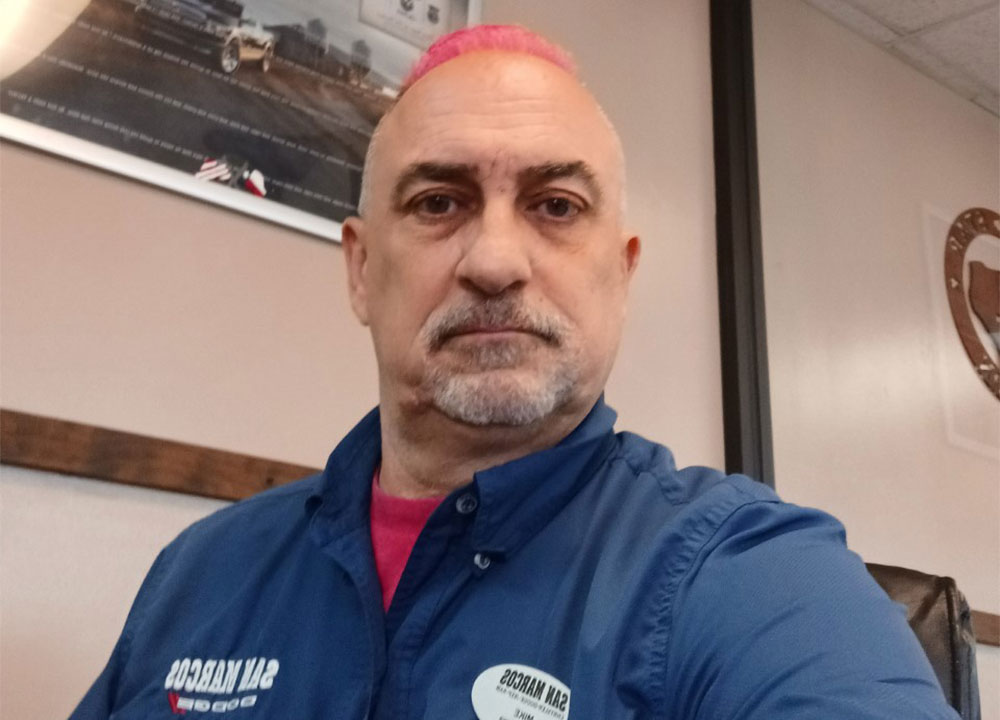 For Mike Diers, 54, perception is reality. Worrying about things outside his control is not his way–he’s laser-focused and takes life step-by-step.

Of course, some things in life are beyond any one person’s control. In those instances, Mike’s logical nature blends with his faith in a higher power. That balance would be crucial as he faced down cancer.

Fending off ‘doom and gloom’

It was Thanksgiving 2016 in Kyle, Texas, and Mike couldn’t shake a lingering cough. He figured it would fade over time, but in January 2017, he gave in and visited a doctor. A steroid pack and a few prescriptions later, the cough still bothered him.

Mike saw a pulmonary specialist, who told him he had a blockage on his right lung. No air was getting through the blockage, causing his recurring cough. He then saw a different doctor, who conducted two exploratory surgeries to remove the blockage and determined that it was cancer.

“It was a very ‘doom and gloom’ conversation,” said Mike. “I knew myself and knew that I didn’t need to talk about the worst-case scenario. I needed to know, step-by-step, what we’re going to do about it.”

After undergoing exploratory surgery on a Thursday, Mike attended a birthday party for his father on Sunday, where he very matter-of-factly told them he had stage II lung cancer.

“They asked why I waited to tell them, and my thought was that I have this black cloud hanging over me,” said Mike. “Why worry other people if I don’t know what’s going to happen?”

Mike’s not the only one in his family who didn’t want to worry others. A year earlier, his mother was diagnosed with breast cancer and was already undergoing radiation therapy before she told anyone.

“I’ve always had support from my family, and they know that I’ll ask for help if I need it,” added Mike. “At a certain point for me, I turn to God and say, ‘It’s up to you.’”

Following the exploratory surgery, Mike was referred to James Uyeki, M.D., Texas Oncology–South Austin. Dr. Uyeki recommended a clinical trial with a course of checkpoint inhibitor immunotherapy to engage Mike’s immune system to attack his cancer prior to surgery, during which the cancer would be removed. This immunotherapy has transformed treatment of advanced lung cancer, and initial trials suggested that it might improve outcomes for early-stage lung cancer patients.

As a lead participant in US Oncology Research, Texas Oncology has paved the way for new breakthroughs in cancer treatment, helping develop more than 100 FDA-approved therapies. Patients in Central Texas currently participate in more than 55 clinical trials for a variety of cancers.

“In Mike’s case, he went on a clinical trial where he received immunotherapy prior to surgery,” said Dr. Uyeki. “At surgery there was no surviving tumor in the lung and only a small amount of tumor in one lymph node. Mike had a clear understanding of the high risk of even an early-stage lung cancer and gave thoughtful consideration in trying something that had potential to improve his outcome.”

“Dr. Uyeki was upbeat and took the time to explain things to make sure I was on board – ‘this is where we’re at and this is what to expect,’” said Mike. “It was an encouraging way to look at things while I was going through all of this.”

In October 2017, Mike underwent surgery to remove two lobes from his lung. Waking up after surgery, Mike thought, “I made it this far. What’s next?”

He was cleared to go home on a Sunday and planned to take two weeks off from work to recover. But in true Mike fashion, he showed up on Monday at work, where he’s the commercial director of an automobile dealership. “It was payday,” he chuckled. “And the main point is that no matter what, life still goes on.”

Because Mike had cancer in one of his lymph nodes, he received standard of care chemotherapy. Logical every step of the way, Mike scheduled his appointments on Wednesdays because Dr. Uyeki cautioned that fatigue could set in 72 hours after treatment–that way, if Mike felt fatigued, he could rest over the weekend.

But Mike felt fine throughout chemotherapy. The only part he disliked was fighting the traffic into South Austin, he grinned.

Four years on, Mike has been back to normal for quite some time. He visits Texas Oncology every six months to check for any signs of cancer.

“Mike has no evidence of recurrence nor any negative effects from his treatment,” added Dr. Uyeki. “People like Mike are helping develop new treatments for cancer right here in Austin. Immunotherapy has transformed how we approach advanced lung cancer, and he is an example of how using immunotherapy in early-stage lung cancer has the potential to change the outcome for patients facing our deadliest cancer.”

In October 2021, Mike celebrated his mother’s milestone of five years cancer-free by dyeing his hair neon pink, in honor of Breast Cancer Awareness Month. Moments like these are important. He recognizes that despite all that’s going on with work, life, and in the world, what’s in front of him and in the present are where he should focus, taking things as they come.

“A lot of people look at cancer as if they’re walking in a dark tunnel toward a pinprick of light,” said Mike. “It’s better to reverse that and enjoy the present and all the light that’s around you right now.”

In Texas in 2021, more than 15,000 new cases of lung cancer are expected. For more information about lung cancer, visit TexasOncology.com.