Encouraging others through life’s most difficult and devastating moments isn’t just a part of Danny Box’s role as a pastor – it’s in his DNA.

So when he was diagnosed with colorectal cancer, members of his congregation swarmed to be by the Box family’s side, wrap them in love, and lift them up in prayer. It’s a special kind of support that has carried Danny through his cancer journey and helped him continue to inspire and encourage others along the way.

Danny was first diagnosed with colorectal cancer in 2017. One year after the removal of a tumor, a second tumor developed. His cancer had metastasized to his spleen and later to lymph nodes in his abdomen. Screening studies from his initial biopsy suggested he may have an inherited cancer condition known as Lynch syndrome. Patients with Lynch syndrome have a higher risk of developing several cancer types including colon, ovarian, stomach, urinary tract, and uterine cancers.

Danny’s oncologist, Darren Kocs, M.D., of Texas Oncology–Round Rock referred him for a genetic evaluation where his personal health and family medical histories were carefully evaluated.

The test results came back – Danny had Lynch syndrome.

“From the very beginning, there was a lot of optimism around my colon cancer diagnosis and treatment. But when I was then diagnosed with Lynch syndrome, it became clear that the potential of my cancer going away may not be likely. When my cancer moved into my lymph nodes, it was a big adjustment to realize I had a stubborn cancer. I’m not trying to soft sell this, but we had faith God would work some kind of good through all of this, though we did struggle to get our minds around it,” said Danny.

A father’s hope, a family’s future

Given the genetic test results, Danny was concerned about the implications for his family. Gayle Patel, M.S., CGC, director of Texas Oncology’s Genetic Risk Evaluation and Testing (GREAT) Program, said Danny and his family took all the right steps toward addressing his diagnosis head on. “Lynch syndrome runs in families, so it’s important to know who has Lynch syndrome because we can detect cancers earlier or possibly prevent them altogether,” she said.

At Danny’s initial genetic evaluation appointment, Jerrad Stoddard, PA-C, M.A., M.S., advanced practice provider at Texas Oncology–Round Rock, discussed with Danny his abnormal biopsy results and reviewed his family tree. While Danny’s family history of cancer was not striking, genetic testing was still recommended given his own diagnosis of colon cancer. After discussing the benefits of genetic testing Danny consented to have his blood drawn and sent to a specialized genetic testing laboratory, which found that Danny had a mutation in a gene called MSH6 and is associated with Lynch syndrome. At Danny’s follow-up appointment, his results were reviewed in detail, and his care team discussed Lynch syndrome and the implications for Danny and his family.

“Genetic testing was important to my wife and me because we wanted to do whatever it took to ensure our children were tested. My family is now taking preventive measures with an emphasis on pre-screening and early detection. It’s taken some adjustments, but our faith has helped all of us get past the changes we’ve experienced through this,” said Danny, noting that all three of his children were tested, which revealed that two of them have Lynch syndrome.  His family swiftly became aware of the importance of cancer screenings.

Through it all, never stop serving

Throughout his experience, Danny’s care team at Texas Oncology ensured he and his family were taken care of. “They worked hard at being very personal. Despite being busy, Dr. Kocs and his team have done a great job of communicating, and they’re competent, cheerful, and warm. For a clinical setting, it oftentimes doesn’t feel that way,” he said.

Dr. Kocs said Danny has responded favorably to his cancer treatment plan that includes immunotherapy, which uses the body’s own immune system to fight cancer. “It’s an honor working with Danny. He has a joy that is infectious, and courage that is humbling and inspiring,” said Dr. Kocs.

That encouragement is something Danny and his family want to provide to everyone they meet, including other patients they have met along the way. As a pastor, serving others is what Danny says he’s been called to do. Now, others want to show the same support he has shown them.

“Being a pastor, we have 800 people who are intimately involved with what’s going on, how I’m doing, always praying. That kind of community has been encouraging, sustaining, and speaks to how I’m holding up right now. Between our church family, the team at Texas Oncology, and our friends – they’re all important pieces of the ‘support’ puzzle. As you can imagine, it’s important that we use this opportunity to also encourage those around us,” said Danny.

If you have a significant personal or family history of cancer, talk to your healthcare provider about a referral for genetic evaluation, which includes reviews of both genetic and environmental risk factors. For more information on genetic testing, cancer diagnosis, and treatment, visit TexasOncology.com. 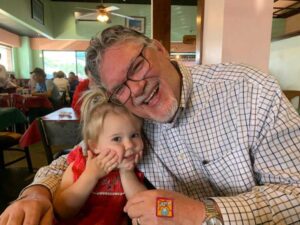