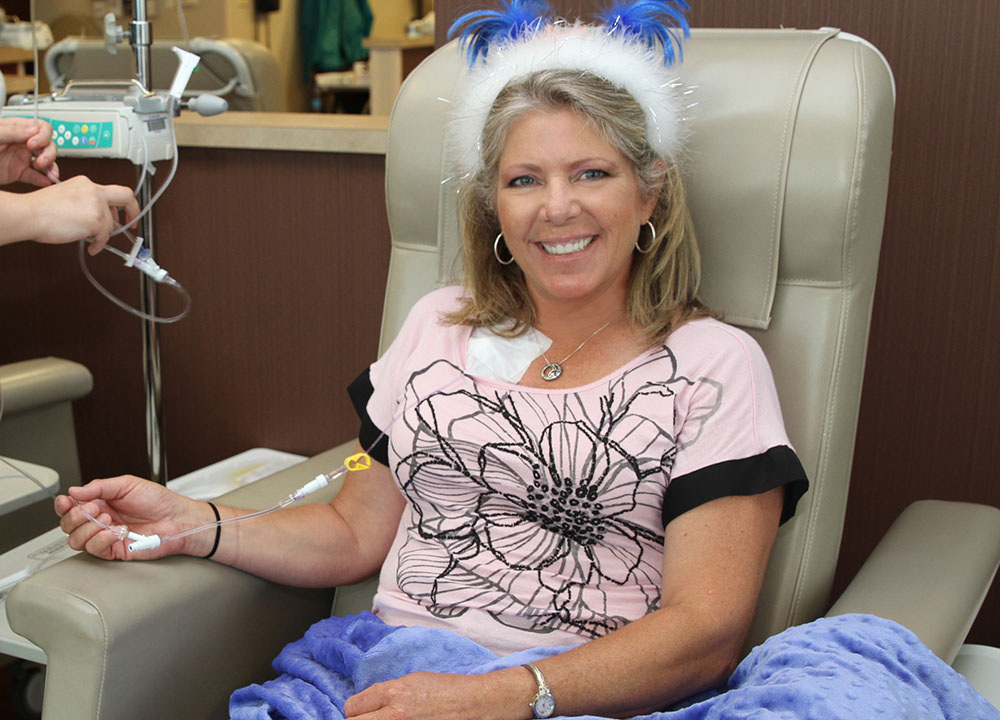 Emily Robinson, 56, wears many hats. Based in Round Rock, Texas, she’s an event coordinator who travels the globe, an artist, and, more recently, a survivor of cancer.

Though she’s learned to handle whatever life throws her way, she never thought she’d experience cancer herself. She developed a mantra to stay focused on what counts after she was diagnosed with colorectal cancer at only 48 years old.

‘I couldn’t believe it’

It started out small. In 2013, Emily told her primary care physician that she noticed blood in her stool. Her physician asked her a few questions and told her it was probably internal hemorrhoids.

However, the amount of blood in her stool continued to increase in the months that followed. In January 2014, she visited a different physician who, again, pointed to internal hemorrhoids, but recommended that Emily undergo a colonoscopy to be sure.

Emily’s older sister accompanied Emily to the colonoscopy. After the procedure, Emily asked her sister how it went. “She told me the surgeon said cancer and I went, ‘shut up,’” said Emily. “I couldn’t believe it.”

“Emily’s colonoscopy showed a mass, and the biopsy revealed it was a classic colon cancer with a moderate to high growth rate,” said Dr. Balasubramanian. “Fortunately, scans did not reveal any distant metastasis, meaning there was no evidence of cancer spread to other parts of the body.”

Just one month later, on February 3, Emily underwent laparoscopic surgery to remove the tumor, as well as the local vicinity lymph nodes that cancer drains into. It was possible the cancer could have potentially spread to these lymph nodes, and after further testing, it was confirmed, resulting in a stage III colorectal cancer diagnosis.

“Emily was considered to have a curable cancer and was treated with intent to cure,” added Dr. Balasubramanian. “However, since her cancer had spread regionally, she required chemotherapy after surgery to reduce her chance of recurrence and increase her chance of cure. She received six months of combination chemotherapy, with multiple combined drugs at a time administrated at each session, given every two weeks.”

This positive mindset reminded Emily of something her mother used to say: “You’re borrowing trouble by thinking about something that could happen.” That’s when it clicked for Emily, and she focused on the mantra that would power her through her cancer journey – “I got this.”

“I thought to myself, ‘attitude is everything,’” recalled Emily. “I’m sick, I’m going to get better, and I’m going to move on. That’s it.”

Despite undergoing chemotherapy treatment, she didn’t slow down at work. In May 2014, she traveled to Sydney, Australia, for an event, going for a jog in her down time. “I’m fortunate to have felt so great the entire time I was receiving treatment. In that six-month span, I maybe missed one work trip and that was because of a scheduling conflict.”

Dr. Balasubramanian recognized Emily’s determination. “Despite the tribulations of diagnosis and side effects of treatment, Emily managed to enjoy her work and life to the fullest during and after treatment. She was always encouraging us to travel, explore, and enjoy life. Her cheerful personality makes us look forward to her visits to our clinic.”

Tests were conducted to determine if Emily’s cancer was genetic or due to lifestyle factors like diet, but no clear answer emerged.

“I was 48 when I was diagnosed, and maybe it would’ve been stage II if I’d had a colonoscopy when I first went to my doctor,” said Emily. “I told all my siblings to go get colonoscopies immediately, and I’d do the same to anyone who thinks something doesn’t feel right. Keep pushing.”

“Though there is still a small risk of recurrence that requires monitoring, Emily is now eight years out from diagnosis and remains without any evidence of recurrence,” said Dr. Balasubramanian. “She has a very good outlook.”

Passion and painting with light

Emily’s journey with cancer taught her important lessons. She recognizes her power and puts aside anxieties about things that might not ever happen. She stopped worrying about what experiences cost, like she did when on a trip to Africa, sailing on a rope swing across the Zambezi River that borders Zambia and Zimbabwe. “It’s worth it.”

It’s also allowed her to focus on her passion of “painting with light,” or long exposure photography. In addition to coordinating events, she opened Lightworx Studio, where her unique photography style and light painting tools transform cars, trucks, and other vehicles into custom pieces of art.

In any endeavor, Emily knows she’s got this. After hearing her story, she hopes others will speak up for themselves in the same way. “For cancer or any kind of illness, if your body is telling you something, listen. Ask for that test because you need to know for sure.”

In Texas in 2022, nearly 11,780 new cases of colon and rectal cancer are expected. For more information about colorectal cancer, visit TexasOncology.com. 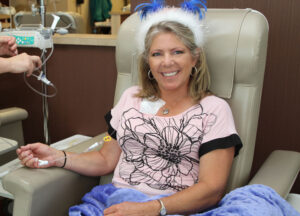