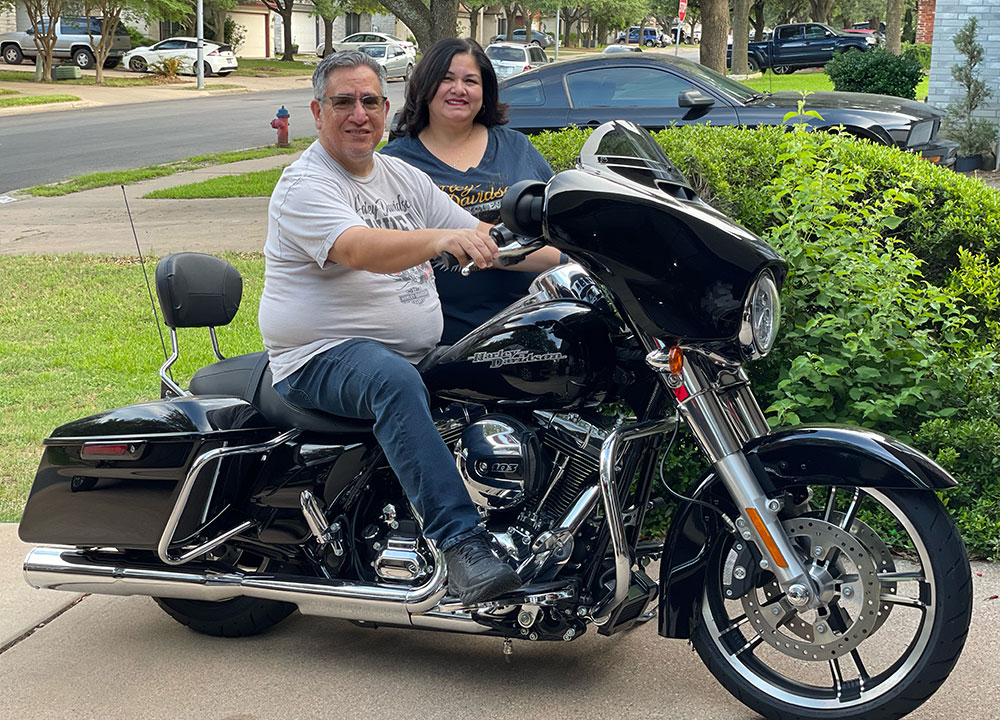 In March 2016, Mark Balderas, 58, bought himself the ultimate toy — a brand new Harley Davidson motorcycle which he named ‘Priscilla’. The very next day, he was diagnosed with stage IV kidney cancer.

‘Priscilla’ sat in the garage for five years, unridden.

Originally from San Antonio, Mark and his family moved to Round Rock in 1977. He and his wife, Linda, have been married 39 years and have three daughters and five grandchildren. Mark and Linda spend much of their time working at their family’s restaurant, Tio Dan Café.

While family and faith have always played a significant role in Mark’s life, he is an even more fervent believer in the combination of the two to overcome the most difficult of odds.

‘I couldn’t believe it’

Mark had been having pain in his left chest area for some time. At times, the pain was so severe it ended up with a trip to the hospital. Despite a number of tests, the doctors never found anything and chalked it up to muscular pain.

At one of several doctor visits, they ordered a CT scan for Mark. It revealed a mass on his right kidney that was traveling up the vein leading to his heart. “This is not what I expected going in. It was a real shock,” recalls Mark. Soon after, he was diagnosed with stage IV kidney cancer. “I always thought I’d die from a heart attack, not cancer,” he says.

The following days and weeks were a whirlwind for Mark and his family. In April 2016, he underwent an operation to remove his right kidney and started his treatment plan, including the combination of an oral medication and infusion treatments.

‘They were the ones to help me get through this’

One year after his diagnosis, Mark’s insurance changed, and he needed to look for a new provider to continue his cancer care. That’s when he found Texas Oncology-Round Rock North and Dr. Hareesha Vemuganti.

Mark knew that everyone was in this fight right along with him, from his family and friends to the customers at the restaurant, the Round Rock community, and the entire team at Texas Oncology. “They were by my side praying for me and supporting me. I didn’t feel alone.”

Under the watchful eye of Dr. Vemuganti, Mark continued to receive his infusions along with a treatment known as immunotherapy, which uses the body’s own defense mechanisms and immune system to attack cancer cells. Unlike traditional cancer treatments that target the cells in tumors, immunotherapy aims to stop or slow cancer cell growth by aiding the immune system in destroying cancerous cells or limiting the cancer’s ability to spread.

Everyone responds differently to cancer treatment. As Dr. Vemuganti notes, research in renal cell carcinomas, such as Mark’s, has been constantly evolving, and doctors are seeing better treatment options on a day-to-day basis.

“Immune checkpoint inhibitor-based therapy has revolutionized the natural history of metastatic renal cell carcinoma – providing better survival outcomes, higher rates of complete response, and durable remissions,” she says. “Approximately less than 10 percent of patients achieve complete responses, and Mark has been one of them.”

‘We aren’t seeing anything’

As Mark continued his infusion treatments combined with immunotherapy, he underwent scans every three months. That’s when something remarkable happened. He remembers Dr. Vemuganti reporting that the team wasn’t seeing anything related to his cancer. His scans were clear.

“After the removal of his kidney in 2016, Mark’s disease was still primarily present in his lungs in the form of lung nodules,” says Dr. Vemuganti. “After initiating immunotherapy treatment in 2017, Mark had an extremely successful response with very few side effects, and the nodules have completely disappeared.”

Mark continued to receive immunotherapy for more than two years for maintenance. Since he has remained disease-free, Mark no longer receives treatment therapies and is closely monitored by his care team.

“I am so excited for Mark and for his continued progress,” shares Dr. Vemuganti.

Mark continues to undergo scans every six months. Each time he sees his doctor, Mark hears “everything looks good.” He goes for his next scan in July and hopes that if the result is the same, he will move to yearly scans. “It’s looking really hopeful,” he says.

Dr. Vemuganti often reminds Mark to “get out and enjoy life.”

And that’s just what Mark is doing. Six years after being diagnosed with stage IV kidney cancer, Mark sometimes makes a point to pause for a moment and take it all in. He continues to work six days a week in his family’s restaurant, and you can always find him surrounded by his family and precious grandchildren. He’s even started to travel again.

Mark and Linda will celebrate 40 years of marriage in August and are planning a trip to Hawaii – something that seemed impossible just a few short years ago.

And what about ‘Priscilla’, his Harley Davidson motorcycle? During treatment, Mark thought “One day I’m gonna get on it.” Well, Mark finally took ‘Priscilla’ out of the garage and for a ride. And as expected, it filled him with joy.

In Texas in 2022, more than 7,090 new cases of kidney and renal pelvis cancers are expected to be diagnosed. For more information about kidney cancer, visit TexasOncology.com. 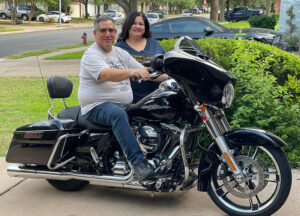