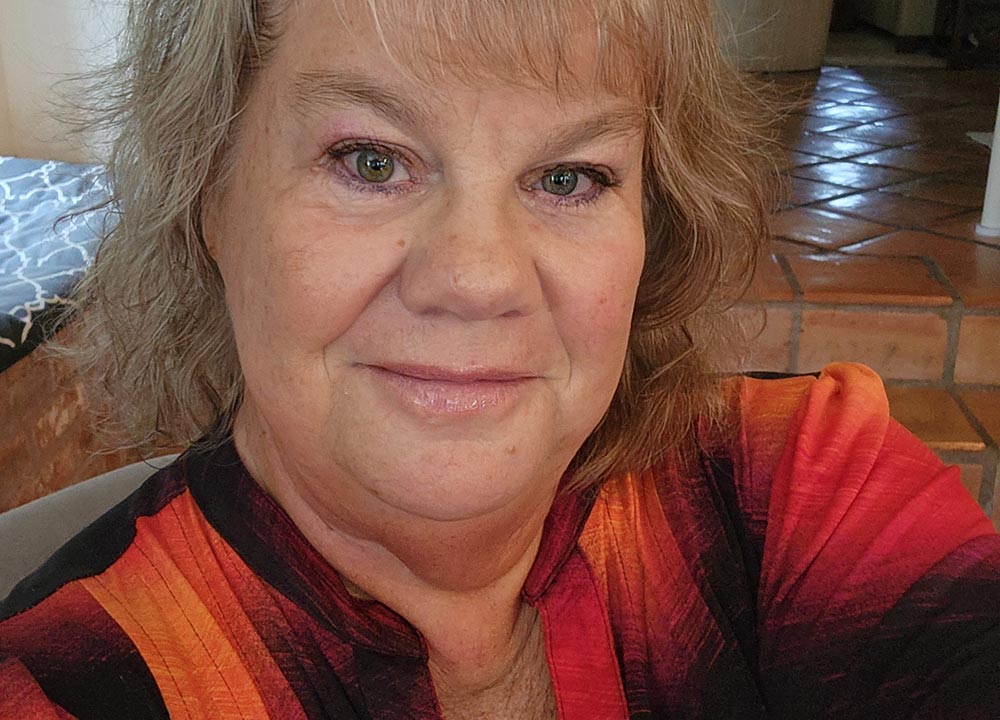 Julee Ware, 65, looks at her life as a series of adventures. A former lead singer and guitarist in a rock-and-roll band, low-carb food innovator, and private investigator who started her own business eight years ago, her life story has been anything but ordinary. There was no way an unexpected diagnosis of cervical cancer would knock her down and keep her from inspiring others.

‘I put my health on the back burner’

Julee and her husband, James, call Austin home and have been married for 15 years. Between them, they have three grown children and eight grandchildren. They also have three rescue dogs they “dote on ridiculously.” One of those dogs, Sasha Malia, would play a very central role in her cancer journey.

Three years prior to Julee’s cancer diagnosis, and already in menopause, Julee experienced some abnormal bleeding and an unusual feeling of fullness in her abdomen. “I knew something wasn’t right, but I put my health on the back burner,” she said. “I told myself I’d get to it when I get to it.”

It took what Julee calls a “catastrophic bleeding event” in March 2022 to call her doctor. Her physician referred her to Paul V. Loar III, M.D., FACOG, gynecologic oncologist, Texas Oncology–Austin North and Georgetown.

Dr. Loar performed an exam revealing a 3 cm growth on Julee’s cervix, and subsequent biopsy confirmed malignancy. Her exam also revealed that the disease had spread beyond the cervix to the surrounding tissue, which diagnosed her with stage IIB disease. Considering the size of the tumor and how long she waited, Julee was grateful to hear Dr. Loar say her cancer was still treatable and possibly curable.

“Through it all, Julee stayed as upbeat as possible, listened to our recommendations, and worked hard to get through it,” said Dr. Loar. “She always has a big smile on her face. Even when I’m having a bad day, if she’s on my schedule, I know she’ll cheer me up.”

Dr. Loar and the team at Texas Oncology laid out Julee’s treatment plan, which included radiation five times a week and seven rounds of chemotherapy.

“I learned how to meditate on my second day of radiation” Julee recalls. “I would close my eyes – I never once looked around when I was in there. As I meditated, I could feel this blue healing light flowing over my body. They told me I was the only person they ever saw smile during radiation.”

Julee also underwent five rounds of brachytherapy, an internal radiation therapy that puts a source of radiation in or near the cancer for a three-hour period. This is where she met Michael Herman, M.D., radiation oncologist, Texas Oncology–Austin North Radiation Oncology and Round Rock.

“I just love him,” Julee says of Dr. Herman. “He is progressive in his thinking and very forthcoming on what I was going through. He was confident that with my attitude, overall health, and the innovative techniques Texas Oncology offers, I would come out of this just fine.”

Julee was haunted hearing stories from other women who underwent brachytherapy. “I was able to undergo treatment with Dr. Herman and be in and out in three hours with very little discomfort.” So many of her “sisters” didn’t have that experience, and she had many discussions with Dr. Herman as to why. “As an investigator, I can’t stand to see other people needlessly suffer. I’m on a mission to fix this for other women.”

Julee was also the first cervical cancer patient at Texas Oncology to undergo the Signatera blood matching program. This highly sensitive and personalized molecular residual disease assay (MRD) uses circulating tumor DNA (ctDNA), custom-designed for each patient to help accurately monitor for the presence or absence of cancer over time. Her first test came back negative in December, and she will continue to be screened every three months.

‘In a club you never asked to be in’

Julee considers herself incredibly lucky for the care she has received. “I’m so grateful I ended up with Dr. Loar and Dr. Herman,” she says. Of her experience at Texas Oncology, “I wasn’t expecting it to be as progressive, kind, warm, informative, loving, and professional as it was.”

From the radiology technicians to the chemotherapy nurses who could find her vein every time the first time, Julee never felt alone. “It doesn’t matter where you are in the building, you are in a club you never asked to be in, and everyone there with you is in the same club,” she says.

Julee completed treatment in September and underwent a PET scan in November. While on a telemedicine appointment call with her care team, Dr. Loar walked in waving a piece of paper and said, “You’re clear. No evidence of disease.” Julee was so joyful and describes it as “a moment.”

Now that she’s had some time to process, Julee is surprised she didn’t have much depression or anxiety during treatment. She attributes it to being like a football player. “You don’t stress about the game while in it — just make the touchdown and win.”

She is taking advantage of the survivorship counseling offered through Texas Oncology. “I went through a bit of a down period afterward, wondering if I would ever feel like myself again,” Julee says. “Would I be able to help in the business like I used to, if I could ever not be a burden to others.”

‘I am going to beat this’

There are many people who have supported Julee on this unexpected adventure: her husband, James, who was by her side through every moment; her children and grandchildren who called and texted her every day; her business partner, Cindi, who kept the work going.

She also acknowledges her care team at Texas Oncology with saving her life. “Julee was diagnosed with a locally advanced cervical cancer and at the time of her diagnosis she was shocked,” says Dr. Herman. “She had been living a healthy lifestyle, and cancer was the last thing she thought she would get. She told me ‘I am going to beat this’. That bold and optimistic attitude helped Julee throughout her treatment journey.”

And Julee would be remiss if she didn’t mention her dog, Sasha Malia. During her cancer journey, Julee wasn’t fully comfortable sharing all the details publicly. Through a blog posted to her Facebook page, “The Adventures of Sasha Malia,” Julee told her story through the “eyes” of her canine companion and conveyed the thoughts and feelings Julee had during treatment while keeping her community in the know on what she was going through.

Julee’s message to other women now is to pay attention to their bodies. “I thought once you hit menopause you don’t have to worry about things like cervical cancer. I was wrong, and I’ve been given a second chance. Make your health a priority.”

The most effective screening tool for cervical cancer is a Pap test. When detected early before the cancer spreads from the primary site, there is a 92% chance of cure, according to the American Cancer Society.

Julee’s favorite English proverb, “A smooth sea never made a skillful sailor” rings even more true to her today. “If I had to get cancer, I would not want to be anywhere else or with anyone else but this team.”

In 2022, an estimated 1,463 Texas women were expected to be diagnosed and 455 were expected to die from cervical cancer, according to the Texas Department of Health and Human Services. For more information, visit TexasOncology.com. 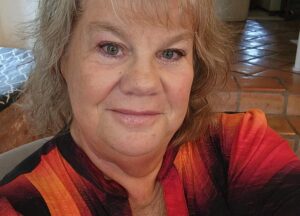