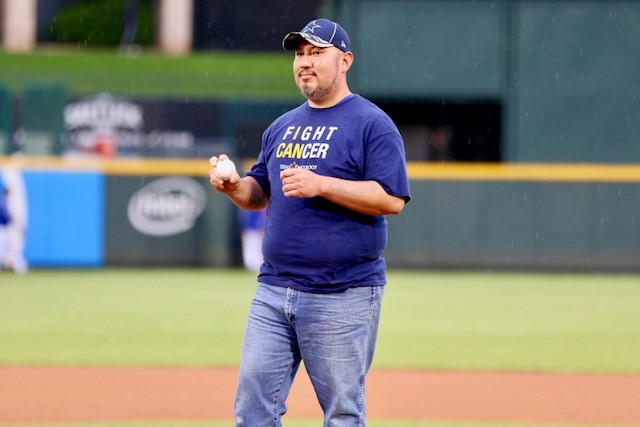 As an active and involved husband and father of four, Juan Molina treasures time on the baseball and football fields with his kids. But after experiencing troubling symptoms in 2013 – back pain and blood in his urine – Molina was sidelined. Two emergency room trips, tests, and more doctors, soon led to a dreaded diagnosis: stage II kidney cancer.

“It was originally diagnosed as kidney stones,” says Juan. “I had surgery to remove the kidney, followed by a year of recovery.”

All of that was followed by more bad news in January of 2015. Juan’s renal cell carcinoma, a common form of kidney cancer, had spread to his lungs. Juan originally sought treatment from two doctors, including one in Houston, which required him to make frequent trips for treatment. However, once his cancer progressed, he was referred to Dr. Jeff Yorio of Texas Oncology-Austin Central, where he is currently a patient.

“I like how Dr. Yorio has taken care of me,” said Juan Molina.  “I wanted him to be my doctor.”

Under Dr. Yorio’s care, Juan’s treatment has evolved, and has included some of the newest and most innovative forms of treatment, including immunotherapy drugs. Over the past year and a half, Juan has had a notably positive response to a relatively new targeted therapy, cabozantinib— which was approved just two years ago as a treatment for kidney cancer.

“I think [Juan] is a great example of benefiting from brand new treatments that have come out in the past several years,” said Dr. Jeff Yorio of Texas Oncology. “Many of the medicines that he has had weren’t even treatment options when he was originally diagnosed. Our goal is trying to turn this cancer into a chronic disease that we can control for a long time with different medicines.”

Juan added that Dr. Yorio is not just concerned about his cancer, but also his comfort – offering Juan different treatment options, and allowing him to switch from the ones that caused the most discomfort.

“[Dr. Yorio] made sure I’m happy,” said Juan. “Medication is always going to be painful, but he’s made sure things have been steady for me. He’s the best doctor I’ve had.”

In addition to the convenience of getting care close to home, Juan said that the team at Texas Oncology provides a collaborative and caring environment for him and his family during his fight against cancer.

“The team is great,” said Juan. “They communicate. The doctors, the nurses, the people doing the chemotherapy, they all wanted to make sure everything was fine. I’m happy we’re with them.”

On his current treatment, cabozantinib, most of his tumors have completely disappeared, but in a recent visit, Juan found out that one spot showed some slight growth.  Given the great overall response, he remains on this treatment with close monitoring. While it’s difficult to face, Juan is battling cancer with a toughness and determination best described as heroic.

Sometimes heroes face battles that seem insurmountable. But for Juan, the source of his courage and inspiration to win is his family – the people counting on him. Juan said it’s his love for his wife and children that keeps him going.

“I see my kids’ faces and I’m kind of like a superhero to them, like Superman,” said Juan. “So, it helps me to keep fighting, for my family. I wear a Superman shirt all the time. I’m their superhero.”

“There are other things besides thinking about myself,” said Juan. “I think about my family. My wife and my kids. So, they see how strong I am, even though I’ve had all these surgeries, and have this disease in me. I want them to know ‘My dad is a strong guy. He did this’.”

Juan added that he’s not letting cancer get him down or stop him from doing what he loves. In heroic fashion, he understands what he’s up against, and with the support of his team—at home and at Texas Oncology—he’s bravely fighting his battle every day.

“You’ve got to take a look at what you’ve got in life, and just keep going,” said Juan. “You just stay strong and don’t let cancer beat you. You beat cancer. That’s what I think. I’m not going to let cancer beat me. I’m going to try to beat cancer, and fight it as long as I can.”

Symptoms for kidney cancer include intense pain (in the flank, abdomen or back) and blood in the urine. Men and women experiencing possible symptoms should discuss the most appropriate screening test with their physician. For more information on Texas Oncology, please visit www.texasoncology.com. 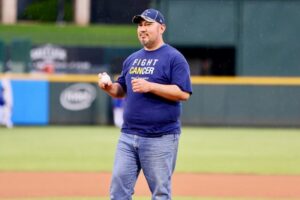